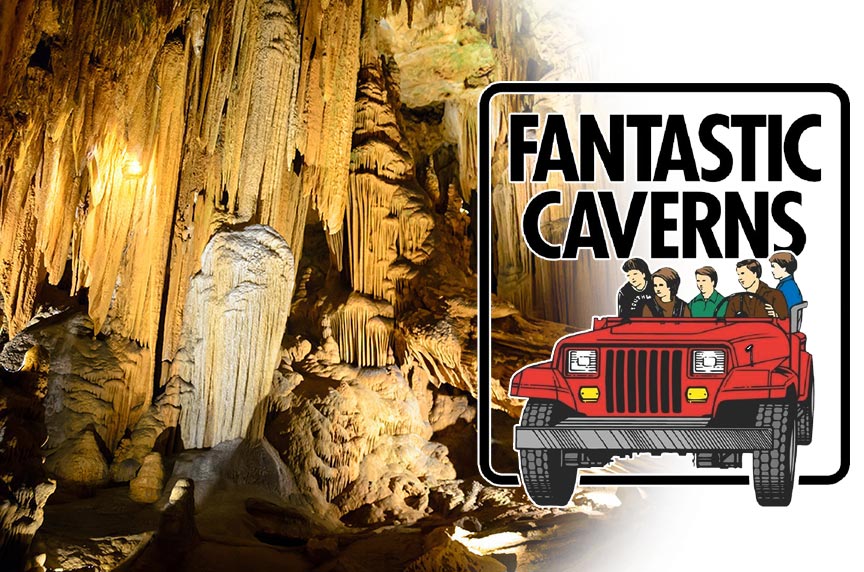 Fantastic Caverns, in Springfield, Missouri, is the only show cave in North America to offer a completely ride-through tour. Sit back in your Jeep-drawn tram car as it takes you along the path of an ancient underground river.

Missouri is known as the cave state, with literally thousands of underground caverns riddling the ground beneath our feet. Despite this, only 18 are open to the public. Of those 18, Fantastic Caverns tends to stand out. Not only is it the only ride-through cave tour in the country, it also has a unique and fascinating past.

Springfield’s Fantastic Caverns were discovered in 1862 by a farmer named John Knox and his hunting dog. Knox didn’t tell anyone until 1867, however. It was the time of the Civil War and Knox feared that the saltpeter within the cave would be used to make more gunpowder.

When he did let the secret out, it was in a Springfield newspaper ad seeking explorers to investigate his find. A team of twelve women from the Springfield Women’s Athletic Club responded. With ropes, lanterns, and mapping supplies, they became the first to explore Fantastic Caverns.

Inside, they found a subterranean world of caverns, pools, tunnels, and everywhere, weird and wonderful stone formations. Stalactites, stalagmites, draperies, flowstone, and more.  The names of those first, brave adventurers can still be seen inside the cave, where they carved them deep into the soft limestone.

Over the years and beyond simple curious exploration, the cave has served a variety of purposes. During the Prohibition Era, it was home to a variety of speakeasies. In the 1950’s and 60’s, it even spent some time as a concert hall!

The current owners of Fantastic Caverns began offering all-riding tours in 1962. Visitors tour the cave in a comfie, Jeep-drawn tram that follows the course of an ancient underground river. Guests have the choice of riding in the tram or the Jeep. The cave stays at or near a constant 60 degrees, the tour area is well lit, and the tours last around 1 hour. Don’t miss it!

4872 N Farm Rd 125, Springfield, MO 65803
Fantastic Caverns is open year ’round and located just northwest of Springfield, Missouri. Lots of folks headed to or from Branson, MO find it a convenient stop along the way. Visit Fantastic Caverns website for hours, directions, and more info. You can also visit them on Facebook.

Planning a Missouri getaway? Great idea! There’s something fun to see and do in every corner of the state! Accommodations at a Missouri B&B will go a long way towards making your vacation the very best it can be. Missouri inns make the best homebase for all your explorations, no matter what form they may take: hiking, biking, sightseeing, wining, dining, business, and more. Find your Missouri home away from home today.