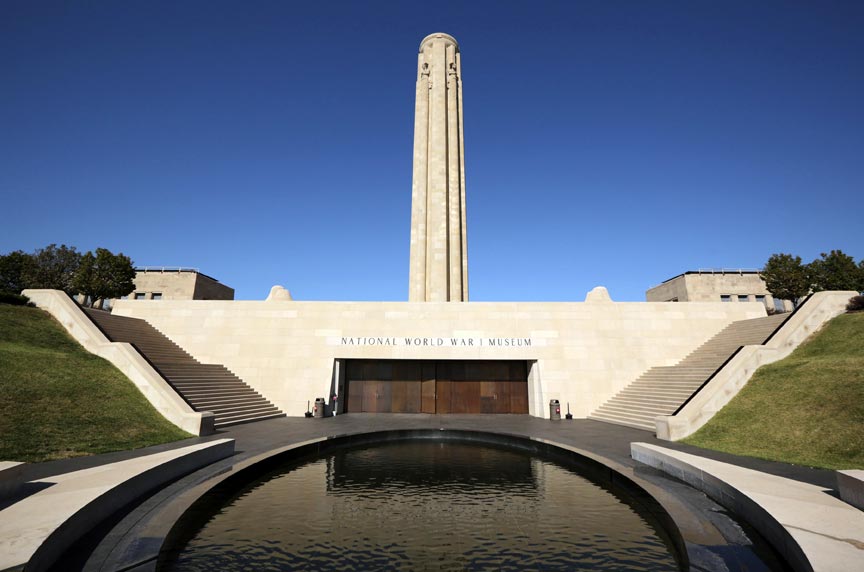 The National WWI Museum and Memorial, located in Kansas City, MO, is the only American museum solely dedicated to the Great War, as seen through the eyes of those who were there.

The First World War, erroneously called “the war to end all wars”, lasted from July 28th, 1914 to November, 11th 1918. It was one of the largest and deadliest wars in history. More than 70 million military personnel joined the fight … and more than 40 million military and civilians paid the ultimate price.

America’s National WWI Museum and Memorial serves to preserve the memories of, and honor those who served in the Great War. It also works to educate those who came after, via interactive displays, eyewitness testimonies, and one of the largest collections of WWI artifacts in the world.

The Liberty Memorial first came into being in 1919, when the citizens of Kansas City raised more than $2.5 million for it in just 10 days. In 1926, a crowd of 150,000 showed up for President Calvin Coolidge dedication of the site.

The site was redesignated as the National World War I Museum and Memorial in 2014.

Visiting the Museum and Memorial

The National WWI Museum holds more than 300,000 objects and documents from WWI. Easily the most diverse collection of such items in the world.

The museum’s collections are presented through interactive exhibits and realistic battle scenes. Many of the highlights allow you to viscerally share in the sights, sounds, and stories of the First World War.

Your journey begins with a walk across a glass-floored bridge. Below, a field of 9,000 red poppies represents the wars’ fatalities, with each flower representing 1,000 fallen soldiers.

You’ll see a Renault FT-17 tank with a gaping hole blown in it’s flank. Walk through a 20 foot wide, 15 foot deep, Howitzer shell crater in a French farmhouse. View a sobering recreation of No Man’s Land and visit life-size trenches for a small sense of what some WWI soldiers experienced.

Visitors can also climb to the top of the 217 foot tall Liberty Memorial Tower. Its height makes it one of the world’s tallest war memorials.

The National WWI Museum and Memorial

Planning a Missouri getaway? Great idea! There’s something fun to see and do in every corner of the state! Accommodations at a Missouri B&B will go a long way towards making your vacation the very best it can be. A Missouri inn makes the best homebase for all your explorations, no matter what form they may take: hiking, biking, sightseeing, wining, dining, business, and more. Find your Missouri home away from home today.