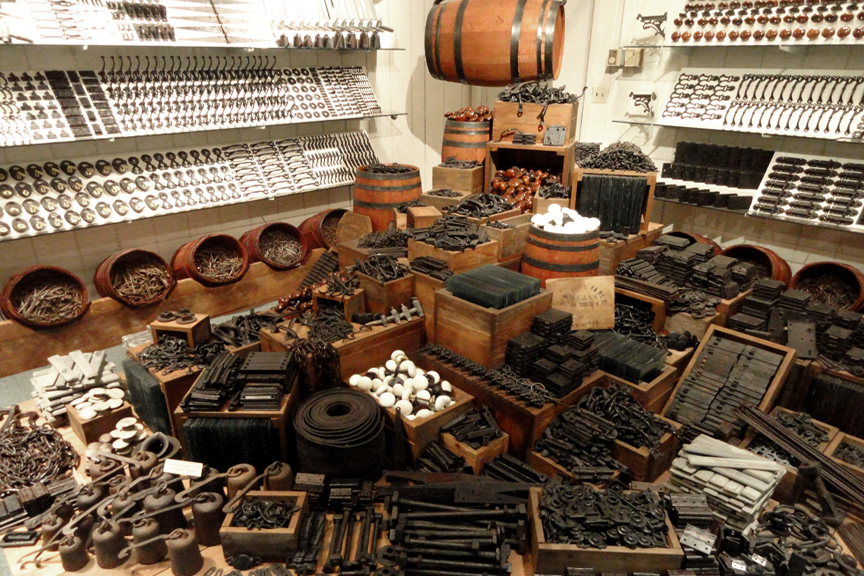 Close up of a ithomiine butterfly, of the Melinaea Satevis genus, on a green leaf with a turquoise background. This type of butterfly is common in Central and South America (cloud and rainforest climate). Photographed in Yasuni National Park, Ecuador.

The steamboat Arabia sank on the Missouri River near Kansas City in 1856. Its rediscovery in 1988 revealed 200 tons of remarkably preserved, pre-Civil War artifacts – the largest collection in the world. Come see it at Kansas City’s Arabia Steamboat Museum!

The Missouri River claimed numerous steamboats during their heyday in the 1800’s. Prior to the addition of dams, the Missouri’s unpredictable and sediment clouded flow proved quite treacherous. The steamboat Arabia was just one of some 300 vessels lost to the river in those days.

The Arabia, built in 1853, was a side wheeler with paddle wheels that were 28 feet across. Her boilers could consume up to thirty cords of wood per day – all to average an upstream speed of about 5 miles per hour. Originally used as transport on the Ohio and Mississippi rivers, it began plying the waters of the Missouri in 1855.

The Sinking of the Steamboat Arabia

On September 5, 1856, the Arabia hit a submerged tree at Quindaro Bend, near the town of Parkville, Missouri. The tree ripped open the Arabia’s hull and she began to rapidly fill with water. Luckily the boat settled into the Missouri’s mud, leaving the upper decks above water for evacuation. A poor, lone mule, accidentally left tied to sawmill equipment, was the only casualty.

Salvage attempts were largely useless and, within a few days, the boat sank below the water and deep into the river bed’s soft mud.

The Arabia stayed hidden in its unmarked grave for more than 130 years. During that time, the river shifted its course. The sunken steamboat was now a half a mile to the west of the river, resting some 45 feet beneath a farmer’s cornfield.

Rediscovery of the Arabia

The Arabia went down fully loaded with 200 tons of goods meant for general stores and homes in frontier towns across the mid-west. Imagine, if you will, a pre-Civil War floating Walmart. Legends of her cargo contained promises of whiskey and gold and many hoped to find her.

In 1987, armed with maps, old newspaper clippings, and a metal detector, David Hawley finally did. Careful excavations commenced and, by 1991, the recovered ship and cargo became the basis for the Arabia Steamboat Museum.

As it turned out, thanks to the mud of the Missouri River, the Arabia was an unwitting time capsule of pre-Civil War life on the American frontier.

The mud had not only swallowed the ship, it had protected it from the destructive effects of light and oxygen. Much of her cargo was found remarkably preserved. Ready-made clothing, tools, guns, medicine, and dishes, were all discovered looking none too worse for the wear. Some sealed foodstuffs were even found to still be edible!

The Arabia Steamboat Museum, in Kansas City, offers a one-of-a-kind opportunity to examine the wreck’s long-hidden and well-preserved treasures.

The museum’s vast collection will fascinate visitors. Artifacts are still being preserved and added to the collection on a regular basis. In fact, there are so many items from the steamboat Arabia that the museum isn’t big enough to display it all! You can even watch the preservation process during your visit.

Looking for the best in Missouri lodging? Look no further! A locally owned Missouri Bed and Breakfast is your key to hospitality, comfort, and value. Make the most of your Missouri getaway with the kind of personal service and top-tier amenities you’ll only find at a Missouri B&B. Find your Missouri home away from home today!