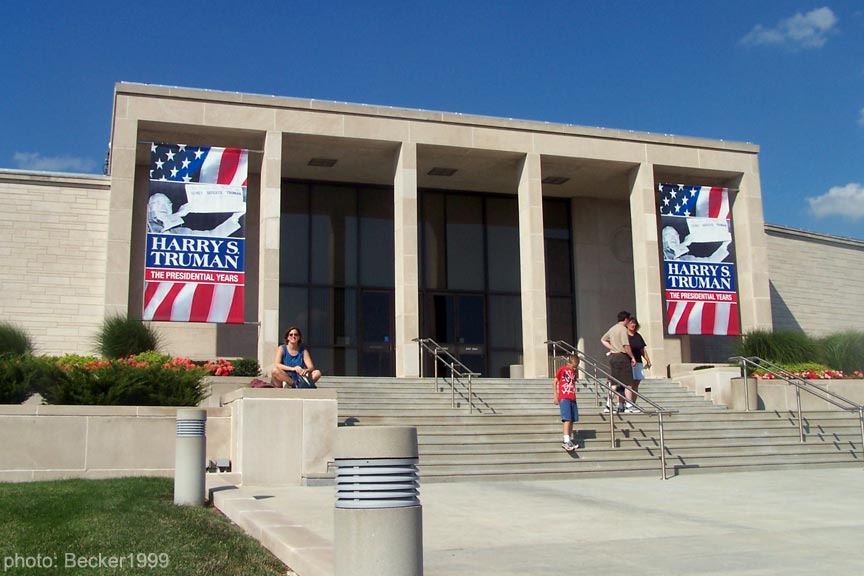 Come to Independence, MO for an up close look at the legacy one of our most accomplished Presidents at The Harry S Truman Library and Museum!

Truman’s time in office is one of the most eventful and studied periods in American history. When he left office in 1953, he was one of the most unpopular presidents in our country’s history, achieving even lower job-approval ratings than Richard Nixon. Hindsight, however, has changed our tune somewhatg and now Truman is ranked among our country’s finest presidents. Learn why with a visit to the Harry S. Truman Library!

President Truman was a Missouri native, born in Lamar in 1884 and moving to Independence when he was 6. He lived in Missouri for the majority of his life, serving as both a judge and Senator for the state.

Truman was picked as running mate for Franklin D. Roosevelt’s unprecedented fourth term campaign and was elected as his Vice President in 1945. When FDR died some four month later, Truman ascended to the nation’s highest office. 1948 saw him voted into the position once again.

President Truman’s legacy includes some startling highlights from our country’s history. He worked on and signed the Marshall plan, which helped spur economic growth in war-torn, post-WWII Western Europe. He created the NSC, the CIA, the NSA, and signed executive orders to end racial segregation in the armed forces. He’s also infamous as the first world leader to use atomic bombs in a conflict.

Visit the Truman Library and Museum

Discover all these interesting facts about our country’s 33rd President and more with a visit to the Harry S. Truman Library and Museum.

The Harry S. Truman Library is 1 of only 14 presidential libraries, and many consider it one of America’s best. Harry Truman led the nation through one of its most eventful periods and the library does an excellent job of covering it all.

The facility tells the fascinating story of Missouri’s hometown president through images, memorabilia, and archival materials. Dozens of interactive and hands-on exhibits will take you back in time to decisions whose effects still echo today.

Visit a replica of President Truman’s Oval Office and test your courage and wisdom in the Decision Theater. Would you have done what Truman did? View a chronological display of the major events and issues the Truman’s presidency and check out the museum store.

The library and museum is also the site of the final resting place of our 33rd president. Be sure to visit the Flame of Memory and pay your respects at Harry and Bess Truman’s gravesites.

500 W US Hwy 24, Independence, MO 64050
Open Monday through Saturday, 9am to 5pm, Sundays, Noon to 5pm.
Closed Thanksgiving, Christmas, and New Year’s Day.
Visit the Truman Library website for current exhibitions, virtual tours, and more information. You can also follow it on Facebook and Twitter.

The Truman Library and Museum is a great place to visit – but they’re not going to let you sleep there! For real comfort and value during your Missouri getaway, book your stay at a Missouri bed and breakfast! Truly comfortable accommodations, deep-dish amenities, delicious breakfasts, personal service, and an insider’s knowledge of the area – that’s a Missouri inn. Why settle for the stale offerings of some corporate cookie-cutter of a hotel or motel when you can get so much more at a Missouri B&B? Find the perfect accommodations for your Missouri getaway now!