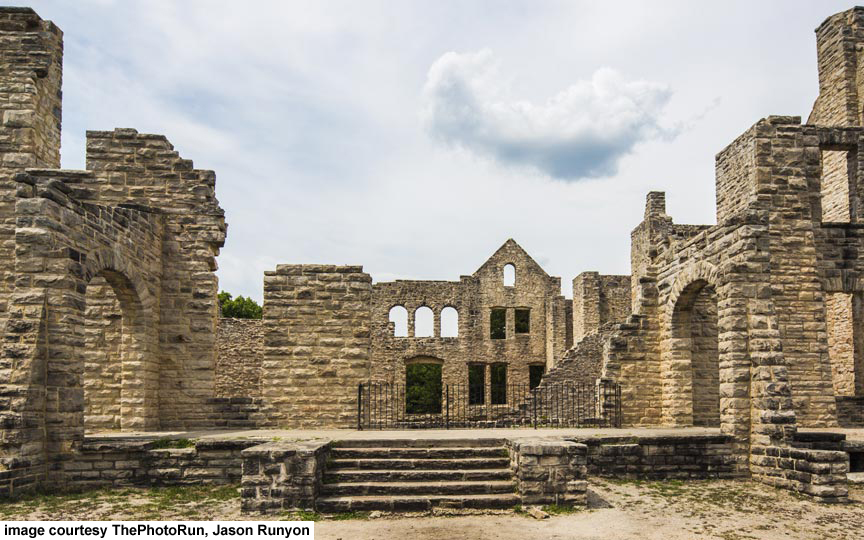 Ha Ha Tonka State Park is a public recreation area in Central Missouri, five miles south of Camdenton on the Niangua arm of the Lake of the Ozarks. The park features trails, caves, sinkholes, a spring … and a the ruins of a massive, abandoned stone mansion.

Ha Ha Tonka State Park is one of Missouri’s many must-visit attractions. Its winning combination of intriguing history, outstanding geologic features, lake, and trails make it the perfect park for anyone and everyone!

The park is a geological wonderland of sinkholes, caves, sheer bluffs, and a huge, natural stone bridge. 70-acres of the park were designated as the Ha Ha Tonka Karst Natural Area in 1981.

Ha Ha Tonka Park is also home to Missouri’s 12th largest spring. Many believe this is the source of the park’s odd name. “Ha Ha Tonka,” is supposedly the Osage phrase for “Laughing Spirit.” Many think this is in reference to the park’s gushing springs.

The natural spring and fascinating geology are not Ha Ha Tonka State Park’s biggest claim to fame, however. That would be reserved for the impressive stone ruins of Ha Ha Tonka Mansion.

Ha Ha Tonka Mansion is frequently referred to as a castle, which is the very effect its builder was going after. Robert Snyder was a wealthy Kansas City businessman with dreams of building his own, European-style castle, right here in Missouri.

Snyder made his fortune in St. Louis and Kansas City during the late 1800’s. By 1905, he’d amassed enough wealth to follow his dreams. Stonemasons from Scotland, a European supervisor, and Kansas City architect Adrian Van Brunt were hired to bring Snyder’s three-and-a-half story tall vision to life.

Ha Ha Tonka Mansion was designed with an iconic center atrium that rose three and a-half stories to a skylight. The plans included nine greenhouses, a carriage house, and an 80-foot private water tower. Local stone was quarried and local timber cut for the construction.

Snyder never saw his dream completed, however. Instead, in 1906 he had the ignoble honor of becoming one of Missouri’s first automobile accident victims. The incomplete mansion languished until 1922 when the family was finally able to complete construction. Ha Ha Tonka Mansion was leased out in 1937 and run as a hotel until a fire gutted the structure in 1942. The estate lay abandoned for decades before the State of Missouri purchased it in 1978.

Visitors to Ha Ha Tonka State Park will enjoy the ruins of Snyder’s turn-of-the-century stone castle. The ruins are currently off limits but they provide impressive views of the Lake of the Ozarks and Ha Ha Tonka Spring. A series of well-maintained trails and boardwalks provide easy access to the park’s many attractions. Swimming, boating, hiking, fishing, picnicking, and more are all available.

Central Missouri Lodging
No matter where your Missouri adventures take you, you’re going to need somewhere to call your home base. Luckily, there are locally owned Missouri inns and B&B’s all across the state, offering the very best in Missouri lodging. Missouri B&B’s offer uncommonly comfortable amenities, nutritious breakfasts, and an insider’s knowledge of the area. Choose your Missouri accommodations now!